After years of trying, I was very excited to learn that I was pregnant. Being a mother has always seemed like the biggest honor, and I was soon to be able to share that honor. My pregnancy seemed normal – jitters as I passed the 12-week mark, morning sickness, and everything I read about. While I knew I was high risk due to my age, I was soon going to learn that there would be much more to it.

At 24 weeks, my boyfriend (Dad, Eric McCluney) and I went to our bi-weekly Maternal Fetal Medicine doctor’s appointment. During our ultrasound, the doctor noticed an irregular heartbeat for our baby. Within 2 weeks, we we’re seeing a pediatric cardiologist at Levine Children’s Hospital in Charlotte, North Carolina. I will never forget that appointment – the doctor told us that our son’s heart has a ventricular septal defect (VSD). We were both very scared and nervous, but the doctors told us that many children don’t require surgery within the first 5 years and that the holes might close on their own.

On December 6, 2021, our first child, Kaidence, was born at 36 weeks at Atrium Health Cabarrus in Concord, NC. Almost immediately, the doctors noticed that he was breathing too fast and rushed him to the NICU for monitoring. Hours later when the echocardiogram was performed, we discovered that he was born with three VSD holes. Two were so large that his breathing wasn’t stable; he was constantly panting as if he had just finished running a race. On day 6, as soon as we walked into the NICU to see our sweet baby boy, we were pulled to the side by a NICU nurse and attending physician. They informed us that when a nurse noticed his legs were extremely cold to the touch, an echocardiogram was done and revealed that his aorta was almost completely closed. The medical term for it is coarctation of the aorta. He would need open heart surgery immediately. We were devastated! Here is our 6-pound newborn baby boy having to have his first surgery before I had ever been able to hold him.

Almost immediately, before we knew it, Baby Kaidence was sedated, placed on a ventilator, and airlifted to Levine Children’s Hospital in Charlotte where he would spend the first weeks of his life. As you can imagine, we were distraught and horrified, but also encouraged, to say the least. We knew it would be a fight, but we knew he was a fighter.

We beat the helicopter to the hospital and met with the surgeon, who gave us reassuring words that this wasn’t normal but also wasn’t uncommon either. This was the beginning of our journey with CHD, but we were ready for the road less traveled. Of course, there was something that seemed unfair about this. We never question God because we’re all firm believers in His will. With that said, how could a person so small and beautiful, so innocent, quite possibly deserve this?

That night, my younger sister, Jasmine, assembled a prayer call with 81 of our family and friends. They sent prayers up for the road ahead. Most of our family, including Eric and I, live in Salisbury, NC. The next 6 days were sleepless and stressful. Our family members were angels in disguise and beacons of strength while we wondered where this was all going.

December 16 was the day of the surgery. We woke up very early since the surgery was scheduled for 6:00 a.m., got to the waiting room, and anxiously began praying again. At 8:27 a.m., the doctor walked in to tell us that the surgery was a success, but we had to wait to see Kaidence. When we got to him, he was breathing slower and looking healthier already!

Dad was very eager to spend time with his son while in the hospital, but he had to return to work soon. That weekend after arriving home, Dad contracted COVID-19. That next day, I was hospitalized for postpartum preeclampsia. Mind you, this was the week of Christmas! We ended up celebrating Christmas, all three of us, separately. Days later, Dad and I went straight to our son’s bedside. Then finally, 34 days after being admitted into the hospital, the day came we were all discharged to go home!

Three weeks later, we followed up with our pediatric cardiologist to check on the VSD. The holes were not closing like they were supposed to, and baby Kaidence was not gaining the expected weight. We were left with

no other choice but to get a permanent feeding tube in place. We were also told Kaidence would have to have open heart surgery again before he turns six months of age.

On February 10, Kaidence had a surgical procedure to install a G-tube. After 2 days in the hospital, Kaidence went home with Mom and is doing great. As we wait for his second open heart surgery, we continue to be thankful for our blessing and grateful for our amazing family and medical team. 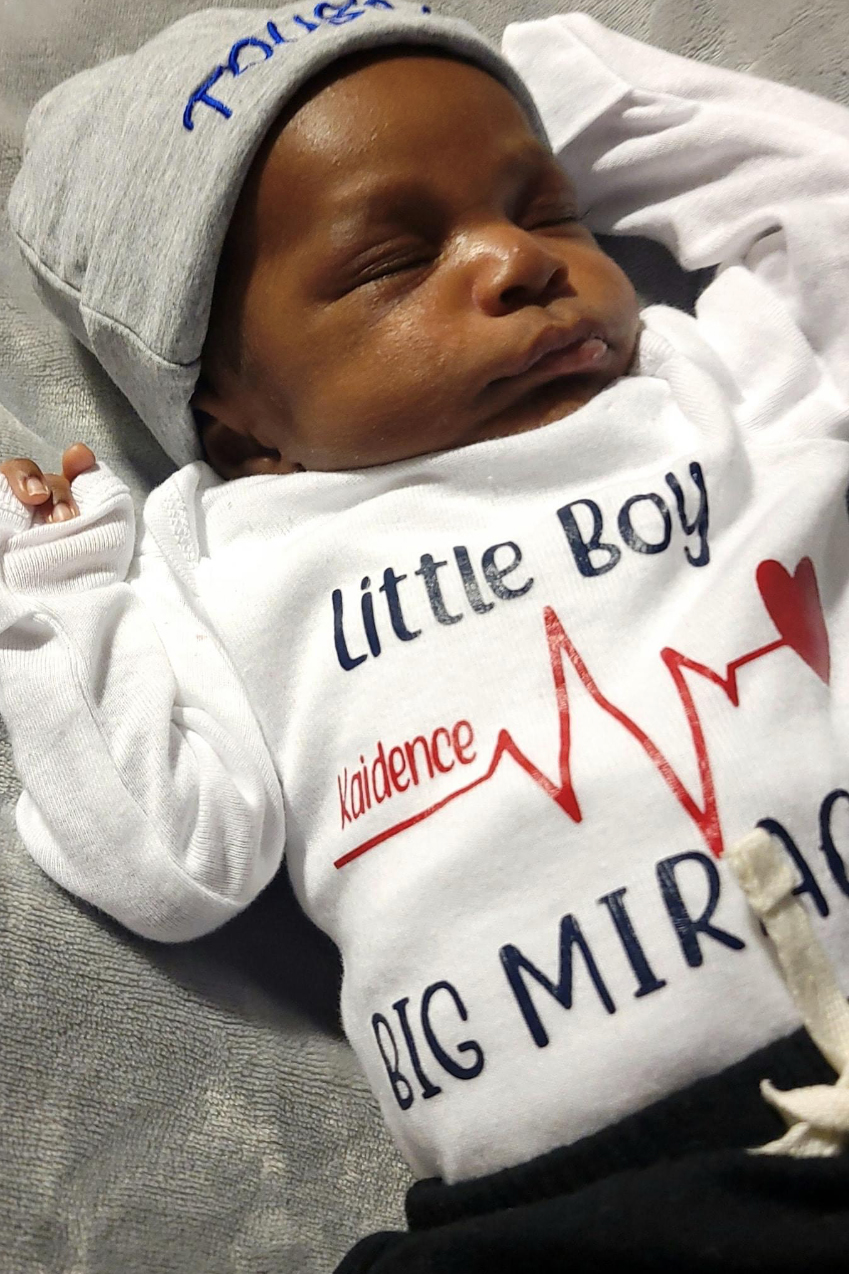